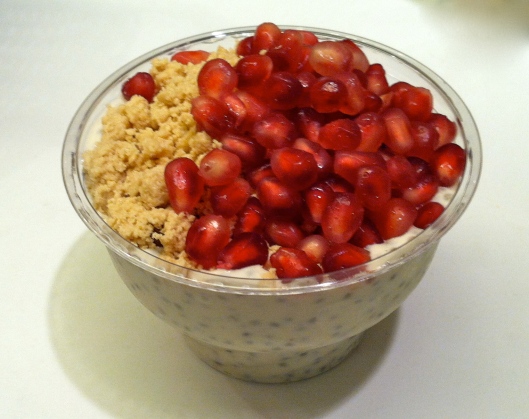 What is it about this time of year that makes everyone so drowsy? Is it the endless shopping for presents? The coughs and sneezes and sore throats that are as prevalent as the cold bursts of air? The curtailed hours of daylight? The holiday parties where excess is no longer dissuaded among coworkers but, in fact, encouraged? Or maybe it’s the pounds of heavy, rich winter foods washed down with too many equally rich desserts. Perhaps it’s a combination of all of these things, but for me, it’s mainly the latter. I’m probably not alone in saying that I have not treated my body as well as I’d like these last few weeks, and I am really feeling pooped. I have no one to blame but that colleague who sent me a four box-tower of Godiva. (Yes, I ate nearly all of it. And I don’t even love Godiva!)

As a result, this week’s post is about trying to be a little better to yourself. It is also my first ever post on a vegan dessert. Don’t be scared! I can tell you, it is mighty tasty.

Victory Garden is a shop that opened in 2011 and was, surprisingly, a novelty on the frozen yogurt scene because it specialized in goat’s milk frozen yogurt. Again, don’t make that face! It is deliciously tangy and moderately healthy. Luckily for me, it is near my office, and has thus sustained many a summer craving for cold desserts.

Victory Garden has been steadily branching into other areas of treats, though, and this was the first time I’d tried their chia seed parfait. Chia seeds are not only the little buggers that make the adorable green grass friends of our (my?) youth, but they are also a nutritional powerhouse in terms of antioxidants, protein, and omega-3 fatty acids. They also (weirdly) expand and become gelatinous when placed in liquid. I know, I’m not helping, am I?

Now, think about tapioca pudding. Tapioca in liquid is also kind of gelatinous, right? It’s also composed of small pearls, yes? So when you think about it, soaking chia seeds over night in cashew milk and adding a bit of agave nectar really isn’t such a far stretch from tapioca pudding, right? Right! That is basically what you get with the chia seed parfait from Victory Garden: a slightly crunchier version of tapioca. (The chia seeds have the consistency of raspberry seeds.)

For $7.50, you get a surprisingly large cup and two toppings. I am a halva fiend, so I had to have that, and to complement the Middle Eastern feel, I added pomegranate seeds. In a word, this was delicious. Tart, nutty, sweet, creamy. So yummy I have designs on making my own at home. Don’t believe me? I’m not the only one who loves the halva and fruit combo over this parfait.

On that note, I wish everyone lots of sweet cheer over this upcoming holiday break. And if you haven’t already gotten a gift, it’s never too late to ask for one of these: