Apologies for last week. It’s all the Christians’ fault. They took me, a lonesome Jewish girl, into their home on Christmas and gave me gifts and fed me ‘til I was stuffed fat as a holiday goose. Between the eating and the sleeping and the chatting and the eating and the napping I completely lost track of time. An old house in suburban Rhode Island, where I was staying with N.’s family, is essentially a vortex where time stands still and a person can forget the day of the week. And so, I neglected to post.

But in case you didn’t get the picture, one thing I did plenty of over Christmas was chow down. Most of what I ate was traditional homemade fare – turkey, stuffing, mashed potatoes, spanakopita (Greek Christmas!), trifle, cheesecake – but N. did take me to a local Rhode Island ice cream joint, Newport Creamery, to enjoy a famed frozen treat with a provocative, intimidating name: the Awful Awful.

So what could possibly be worthy of a title like “Awful Awful”? I was anticipating something on the scale of Ben & Jerry’s Vermonster. Perhaps a banana split sundae sandwiched between brownies, wrapped in a waffle cone and topped with whipped cream, hot fudge, and a maraschino cherry? 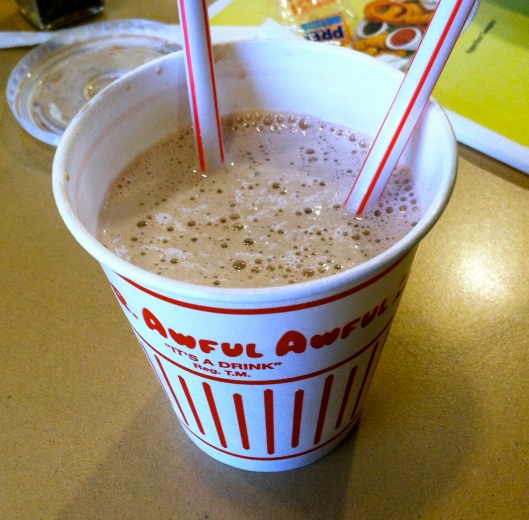 Not awful at all.

No no, nothing like that. It’s really just a monstrously large, extra thick milkshake. So large that N. and I split a junior version and it was still plenty between the two of us. I strong-armed him into the mint chocolate flavor, and it tasted like a liquid peppermint patty. Rich cocoa with a mild minty aftertaste, the ice cream was blended until perfectly smooth and frothy with just enough milk to slurp the whole thing up with a straw. No spoon required. 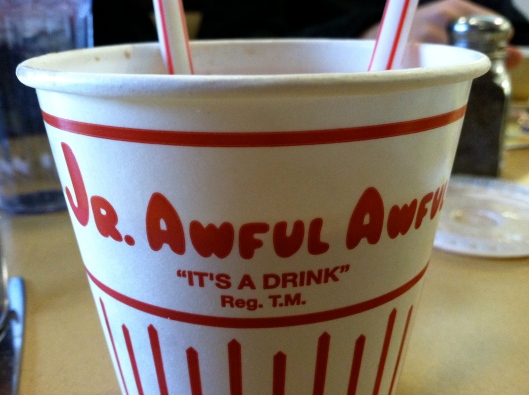 Misplaced quotations, but pay attention to the TM.