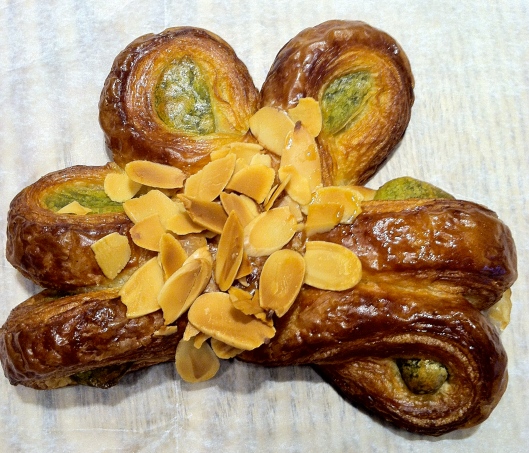 Remember when Asian-fusion restaurants were all the rage in the late 90s and early aughts? And I’m not talking about Chinese restaurants that suddenly (and questionably) started serving sushi. I mean the places that usually paired something Asian (and by Asian, I mean Japanese) with something “exotic”, like the Cuban-Japanese places, or the Portuguese-Japanese places. Fun as it was when it first appeared, like most trends the food soon became rote and uninspired.

Today, there are still some highly visible Asian-fusion joints getting attention, Chinese-Indian and Korean-Mexican most notably, thanks to yet another craze: food trucks. But there is one lesser known fusion blend here that is better known in its land of origin: French-Korean. Specifically: French-Korean pastry.

If you head over to Koreatown, the heart of which lies on 32nd Street between 5th and 6th Avenues, there are now not one, but two French-Korean bakeries on the street. The one holding residence longest is Paris Baguette, a popular Korean chain with outlets in South Korea, China, and the United States.

At Paris Baguette, you will find the typical red bean buns and airy sponge cakes that are common in many other Asian bakeries. However, you will also find some French classics, like canelés and pains au chocolat. But best of all, you will find hybrids like these guys: green pea pastries. 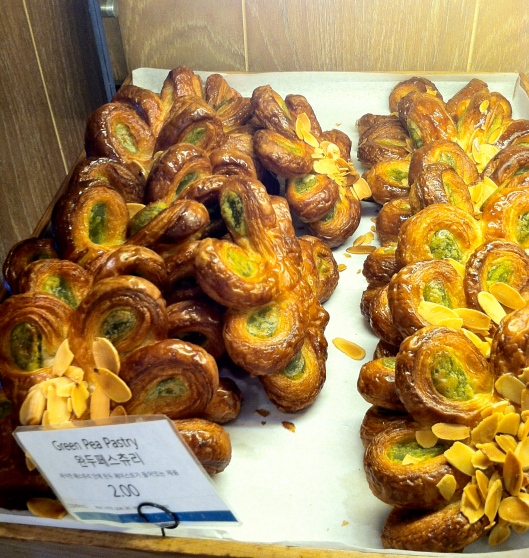 Aren’t these pastries almost too cute to eat? Thank goodness they’re not.

If you are wondering, “What on earth does green pea paste taste like?” I can tell you it tastes nothing like the vegetable with which you make soup. The best comparison is red (azuki) bean paste. Like red bean paste, it has a mellow, almost unremarkable sweetness; in fact, you’d probably be hard-pressed to tell the two apart by taste alone (although I’ve found green pea paste to be slightly smoother and creamier than red bean).

When used sparingly, as in adorable croissant petals, it adds a welcome velvety touch to a crunchy, flaky pastry. Or it should. Unfortunately, the dough in this particular specimen was tough and leaden – especially in the overbaked center – and not delicate or tender. There was no shatter to speak of. Luckily the almonds made up for some of the absent crispness. 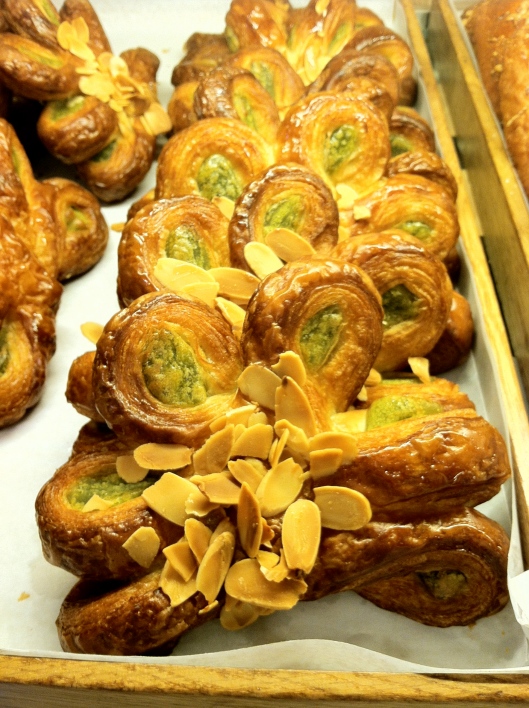 But really, I’m being nitpicky. For $2.00, this is an incredibly cheap and inventive commercially produced pastry that noticeably overshadows the quality of anything you’d find at an American competitor (like the shop with the green mermaid logo which shall otherwise remain nameless).

Finally, an Asian-fusion place that will hopefully be more than just a passing fad. Now if only we can get this place to open a food truck…