My friend Re, my delightful dinner companion that night, has a restaurant dessert philosophy that is heretical to some, but generally well-founded: Avoid the Chocolate Dessert. There is always one, and it is usually uninspired.

Usually, she is right. She likes chocolate, I like chocolate, and sometimes we order the Chocolate Dessert. However, nine times out of ten you will get a completely unremarkable warm chocolate cake or leaden chocolate mousse, even at top restaurants. They’re not bad, per se – high quality chocolate rarely disappoints – just forgettable.

I don’t know why so many pastry chefs feel the need to hew to the classics for the chocolate desserts, but the flipside is that they really get to play around with the fruits. Re and I ordered the flamboyantly named pear bombe, accompanied by goat cheese thyme ice cream and maple walnut brittle ($7).

For the pomp of its name, the actual dessert was much more simplistic and elegant. A whole, poached pear comes perched on a perfect round of brittle. Inside, the seeds have been neatly scooped out and replaced by a quenelle of the ice cream. 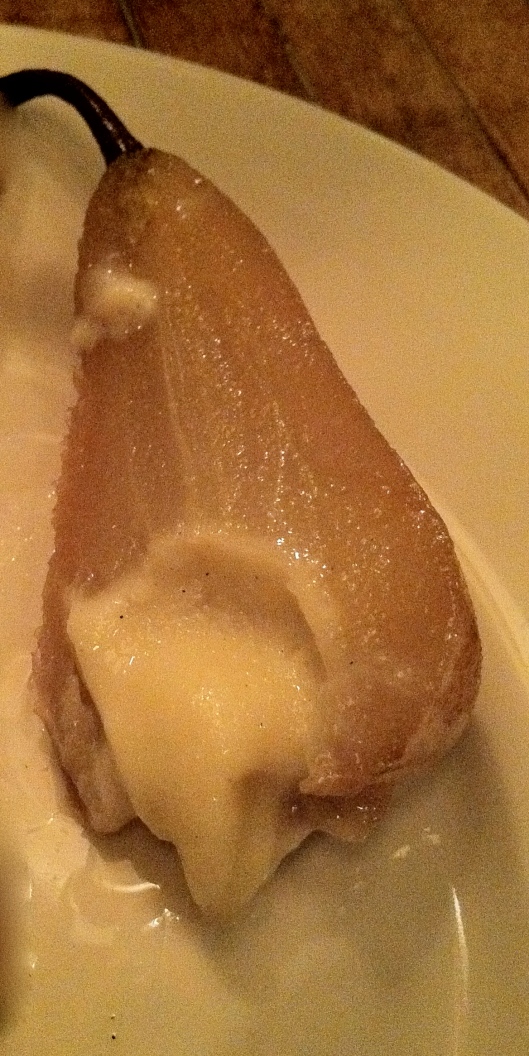 Not the most attractive image, I know, but I wanted to show you the inner ice cream.

Every aspect of this dessert is muted, and works in complete harmony with the other elements. The pear is rendered soft and silky, the goat cheese ice cream is more mildly tangy than piquant, with only a faint perfume of thyme. Together, the two are subtle but pleasingly intriguing. The punch of the dish comes from the brittle, which adds the crunch that the pear is sorely lacking.

This brittle was what every brittle should be. It was crunchy but not sticky or tough, shattering agreeably when cracked with my spoon. There were clear and true notes of pure maple, complemented by a welcome salty, buttery punch. Northern Spy Food Co. should consider selling packets of it alongside the Liddabit caramels by the register.

Quickly putting the pear away between the two of us, Re and I left the dinner table in an unusually good mood. Was it the effect of satisfying conversation or of satisfying food? We couldn’t say, and that is the magic of Northern Spy Food Co. It serves excellent food, intended for excellent company, perfect for good friends and neighbors.

*Apologies for the terrible photo quality. If anyone knows how to take decent shots while in a dim restaurant, please! Enlighten me.