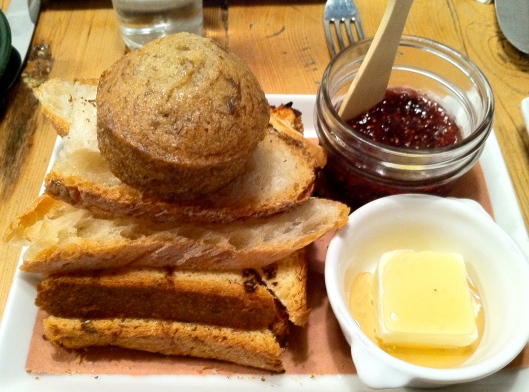 There are a lot of people who think brunch in New York is for lazy wastrels who would rather spend an hour and a half in line simply to pay three times more for their organic poached eggs and French toast than if they had taken the ten minutes to prepare them for themselves at home. To which I say: sometimes a person wants someone else to poach her eggs or French her toast for her.

And let’s not forget the inordinate opulence of brunch offerings. It’s not just an omelet; it’s an omelette with goat cheese, heirloom tomato, and chives. They’re not just pancakes; they’re lemon-ricotta hotcakes topped with macerated strawberries. Semantics, sure, but it is nice to feel indulgent for less than $20.

Then, every once in a while, you order a humble item that so exceeds its promise, you remember: this is why brunch in New York is worth the hassle and expense.

The jam jar at Recipe on the Upper West Side is one of those items.

Recipe is a sliver of a restaurant on Amsterdam Avenue whose attentiveness to seasonality and DIY-mentality reminds me of many similar Brooklyn-born places. And like these Brooklyn compatriots, Recipe does wonderful things with fruit and mason jars.

Homemade jam can be a revelatory experience, and Recipe took full advantage of the late summer figs that have begun to pop up in the farmer’s markets. The end product? A jam so sweet, with the molasses and mineral notes of the figs so concentrated, that you could dig right into the jar with your spoon and feel no remorse because it would be tantamount to eating figs straight from the carton.

But then you look at the price tag – $8.00 – and feel immediate, intense sticker shock. Who in their right mind would pay $8 for jam with some “brioche & country toast”? I would, obviously, but I can’t remember what persuaded me to make such an inane decision. Maybe I had a little bounce in my bank account. Maybe I reasoned I could split the order with friends so it wouldn’t be that exorbitant. Maybe I just really, really wanted the jam that day, price be damned. (Okay, it was probably that last one.)

The plate in profile. (If you look closely, you can see one of the people I coerced into sharing with me. Say hello to S. “Hi, S.!”)

This is where the story takes a turn for the surprisingly pleasant. Instead of getting a few mundane slices of bread, you get a carbohydrate ziggurat, capped with a warm banana muffin. Everything here is as it should be. The brioche is Texas toast thick, perfect for jamming yet thankfully not desiccated. The muffin is not over-sweet and tastes clearly but not forcefully of bananas. The country toast is, well, country toast.

As soon as you’ve taken in this landscape, your eyes turn to the white porcelain dish off to the side. Nestled inside is a pat of butter, sitting in a puddle of caramel maple syrup. Salty and sweet and completely superfluous, but there it is anyway. And it is good. Alone it is almost as good as the jam, but it is best when layered underneath it on a piece of brioche.

You will make quick work of what other restaurants might have treated like a throwaway dish, and you will be happy to pay the $8 for the privilege. You will feel sated and celebrated and completely luxurious. And you might try to smuggle any leftover jam home with you for Greek yogurt later. No one would blame you.